How To Grow A Beard – Everything You Need To Know 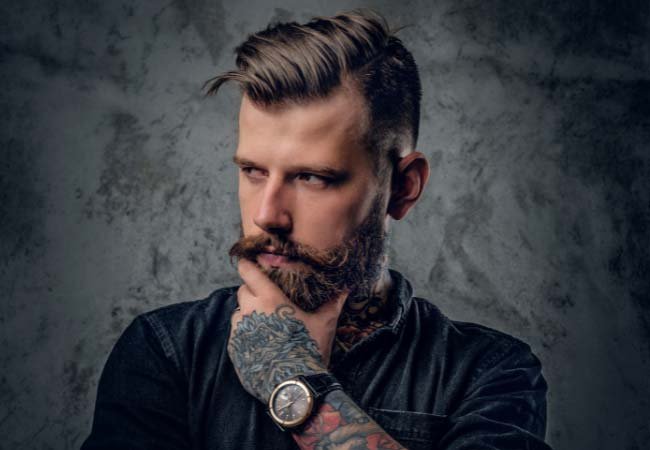 How Can I Grow A Beard If I Have No Beard?

I get this question quite often. Sometimes I get it phrased as “how can I grow a thicker beard?”, but to me, that’s the same thing. The interesting part of this question is not so much what it says about how people view beards themselves (as something to show off), but how it shows just how important social perceptions are in one’s self-image. It also tells you something about their expectations. If someone doesn’t have any facial hair at all, then they’re probably expecting some massive changes to occur overnight after they start applying minoxidil/beard oil/whatever-the-latest-fad-product-is.

This isn’t always true, but when someone starts asking these types of questions online, I always look for other signs of body dysmorphia.

Anyway, to answer the question: Yes, you can grow a beard if you don’t already have one. However, it will take time and dedication, like building anything else worth having in life. This goes back to my post about genetics not being everything – the only thing that will stop you from growing a decent beard is your own attitude towards your facial hair and general facial aesthetics.

The first step is accepting that beards aren’t magic – they’re primarily linked to biology and secondarily linked to social culture – and the reason you haven’t grown much facial hair thus far is probably because of those two reasons; we all want something we don’t have, but not as much when we understand the work that goes into getting it.

Assuming you’ve come to terms with the fact that beards take time and effort to grow, then the next step is actually taking care of your beard. No, this doesn’t mean using a bunch of products – it means understanding your beard’s natural tendencies and working with them, not against them.

For most guys, this will mean growing a beard in its natural state without trying to manipulate it too much. This means no trimming or shaping until the beard has grown in completely (usually around 4-6 weeks).

You’ll also want to start using a quality oil or balm at this point, something that will moisturize and protect the hair from environmental damage. If you’re feeling daring, try using castor oil or coconut oil in your beard during this phase; both are known to give decent results for growing hair.

If you can get over the initial awkwardness of having a scraggly-looking mane on your face, then you’re well on your way to making it work. Of course, this is where online advice tends to fail people – there’s always going to be someone who says “just eat more protein” or “try this shampoo“.

These things might help marginally at best, but the real key here is simply time and patience. And even if you don’t end up with much facial hair, wouldn’t you rather have tried than stayed exactly as you are?

In conclusion, growing a beard is something that can be done by anyone with the right attitude and some dedication. It won’t happen overnight, but with time and patience it’s definitely possible.

Just make sure you’re taking care of your beard in the meantime!

How Can I Grow Beard Fast?

This is a question that many men ask every day. Some men grow their beards slower than others and it takes them months before they can see the result of all their efforts. Still, if you are planning to grow your beard faster here are some tips for you:

That’s a very popular question. Men are asking it everywhere, not only on the forums but also in the barber shops. But unfortunately, there is no answer.

There are 3 hormones which stimulate beard growth, these are testosterone, DHT and insulin.

Lab research has shown that applying minoxidil (Rogaine) to the skin stimulates hair follicles into the Anagen phase of new growth. Minoxidil is a vasodilator which opens up blood vessels in much the same was as Viagra does for men’s nether regions. It causes facial hair to grow faster when it comes in contact with the hormone dihydrotestosterone (DHT). Beard hairs grown this way tend to be very coarse and rough because they lack the finer taper of naturally occurring facial hair which requires testosterone (androgens) for its production.

Beard hairs produced through minoxidil are sometimes referred to as ‘stubble’, after the growth phase common to grasses and weeds. This type of hair is not considered true facial hair by many women because it often lacks a soft tapered end that naturally occurring beard hairs have.

Beard hairs grown through minoxidil can also be damaged very easily, especially if they’re dark in color due to melanin deposits within them. Minoxidil stimulates both the color-producing cells called melanocytes and the cells which give beards their coarse texture called dermal papillae. The beard hairs resulting from minoxidil stimulation also lack protective sebum oils from the sebaceous glands attached to facial hair follicles.

In order for men to grow a thicker and fuller beard, they need to have high levels of testosterone and DHT. These hormones are responsible for the growth of all body hair, including beard hair. Testosterone is converted into DHT by the enzyme 5-alpha reductase.

Some men have a higher level of this enzyme than others, which is why some men can grow thick beards while others can’t. Beard growth can also be stimulated by insulin. Insulin is a hormone that is released by the pancreas in response to increased blood sugar levels. When insulin binds to receptors on cells, it allows them to take up glucose from the blood. Beard growth is stimulated when insulin binds to receptors on dermalillae cells.

Is It Possible To Grow A Full Beard?

There is no one-size-fits-all answer to this question, as the ability to grow a beard depends on your individual genetics. However, most men can grow some amount of beard if they try hard enough.

Some men are able to grow thick, full beards while others are only able to grow a thin mustache. If you’re having trouble growing a beard, there are several things you can do to improve your chances.

First, make sure you’re eating a healthy diet and getting plenty of protein and vitamins. Second, try using a beard growth oil or supplement to help stimulate hair growth.

Finally, be patient and don’t give up – it may take several months for your beard to start coming in full.

How To Be A Model

How To Make Popcorn

How To Make Macaroni Salad

How To Make a Map in Minecraft – Best Tips & Tricks

How To Make Popcorn

How To Make Macaroni Salad